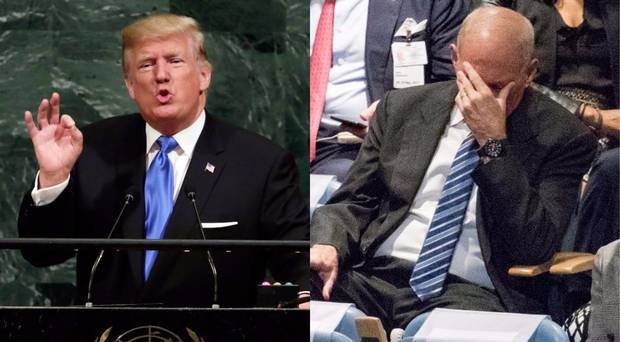 God help us, says Rex Tillerson.
“This moron doesn’t know what nukes do.”
Everybody that’s sane been knew it but it’s still funny to have an,”I’m not a moron” press conference. This shit is getting ridiculous. Yeah I know, but this time really, very ridiculous. Times ten. And now darkly dangerous. I mean Bob Corker is the only motherfucker telling the truth in Washington right now because he’s just had enough of the unreality of it and and most importantly, he ain’t got shit left to give a fuck about. He’s deuces out of this bitch already. As he says, now we have three people guarding the world from chaos. From annihilation. Three fucking people. Tillerson, Mattis and Kelly. And Trump wants to fire two of them currently. Tillerson because he has also has just fucking had it with the retardation and just couldn’t contain himself anymore after the orange dufus called for ten times as many nuclear weapons than we already have because he didn’t like the way a time comparison powerpoint slide looked. The best minds in government and the military of all the worlds nations have worked tirelessly during the past seventy years as partisans of humankind to reduce the number nuclear weapons and therefore the chance that they actually ever get used again. Ever since they all, you know, saw what they actually do to people. Every sane person that’s not, well, a moron, understands the absolute and total destructive power they bring to life. And no one wants to see them used. No matter how much hate they have for another group or whatever blood feud  grievance they might have for another group of people, no one wants to see these weapons used. That in itself is an incredible statement in this violent world. No one wants to see them ever used…except for Trump. He has been talking this shit since the campaign (“Why do we have them if we don’t use them?”). Even Putin doesn’t want to see them used. And that’s one ruthless motherfucker. So, do you see where Tillerson is coming from? Do you understand his pain? Yeah, he signed up for the shit knowing that dude was a dufus but THIS fucking insanely retarded? For real? Comon, really though? Like Bob Corker says, it’s a fucking day care where people spend all day, every day, just trying to make sure that nothing this orange moron tries to do gets done. Every day, that is their job at our nation’s highest house. The world’s highest house. And people are missing their fucking shifts.