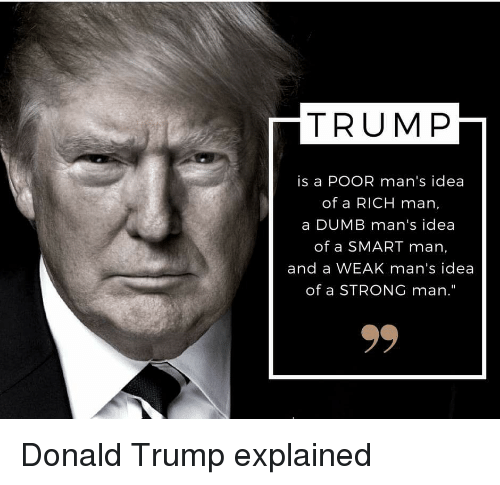 Killing themselves trying to get rid of black people and Mexicans.

Their hate is so deep that they are willing to ignore anything but indications of overt hate or lack thereof. I mean, Trump and the GOP just made a federal law allowing owners of businesses to take tips from employees to “redistribute” them according to their whims. Now anyone with clear eyes can see this is a straight strong arm crook move. A way to simply pad the pockets of owners of hospitality businesses. Which, low and behold, is a major portion of the family business. So this move will in all likelihood increase Trump wealth. Surprised? Fucking crooks. We with clear eyes see this plain as day. A lot of white people that are affected most (comon, you know your waiter with “attitude” was just a racist fuck,) they just don’t care. Why? Because they know Trump internally hates all black and brown people as much as they do. So the amount of slack they give him is enormous. He goes and says he’s going to make a deal with Chuck and Nancy, sounding delighted about it and they start to murmur. He comes back the next day and calls all of Africa a shithole and they cheer again.

Everything he has said he would do to help them since his campaign started, he has gone out of his way to do the opposite. He has actually put in work fucking them over. Still they cheer the demented ramblings at his klan rallies. Drain the swamp for them! He has more people in his cabinet from Goldman Sachs than the last two presidents combined. Every little ass piddly deal he made to bring jobs back to America has fucked them. Carrier smiled, kicked him in the nuts, got a huge tax break, then cut thousands of jobs. And is STILL going to buy their parts from Mexican subdivisions! The only guy to go bankrupt as the casino house gets swindled again. Surprised? Those white people don’t care. As long as they hear Trump keep saying that every brown skinned person is in MS-13. That grandma nanny? Bitch has gang tattoos in her wrinkles you can’t see.

He and the GOP piss on these white people in the open then celebrate with balloons and laughs. Still these suicidal white people love the direction of the country. The GOP cut taxes by the trillions for their billionaire bosses. TRILLIONS. They get a tax increase in two years. The tax cut for billionaires will mean that there will be no money for social security and medicare. Paul Ryan has already shamelessly said as much. “Next on the menu social security and medicare cuts.” The programs that help these white people the most. Save them from poverty and death when they are most vulnerable. Still they like the direction of the country.

Heres a neat fact. The boom in wealth of the 1% and corporate profits from 2009 to now was fueled on low (white) worker wage growth. The fucking bosses made TRILLIONS of dollars on the backs of all American (white) workers without sharing shit with them. Kept their pay low no matter how much profit was coming in. Now that wage growth crept up by most in ten years, the dow dropped over 1000 points. Single biggest drop in a day in its history. Ain’t that some shit. Real (white) peoples’ pay goes up and the rich bosses start to panic and pull their money out. Makes you want to become a commie. At least they pretended that fairness was a worthy goal of an economic system. These GOP fuckers are just looting America. Running down main street with TV’s and worker’s tip jars.

The list goes on. Taking away their health care. Trump and the GOP has stated it as their number one goal to take people’s affordable healthcare away because it was created by a black man. And the fucking dummy white people were all for it for awhile. Until the reality of them facing bankrupting bills and no treatment set in. Then they started murmuring again. Until Trump said that nazis where good people too. Nice white boys in khakis all. Then the white people cheered again.

Cutting consumer protection. When those big banks that they hate so and Trump promised to bring to heel were unleashed to fuck them in the ass again by destroying the consumer protection board, they didn’t say shit. They will feel that too, when they start getting charged pawn shop rates on their credit cards again and have no one to complain to. The consumer agency had recouped over six billion dollars on behalf of regular (white) people. And made many businesses amend crooked practices that harmed regular (white) people. The white people looked puzzled for a minute until Trump said all Haitians have AIDS. Then they cheered again.

It’s all over their hatred of black and brown people. That’s it. People in the media make such twisted logic reasons that try to make sense of why white people would harm themselves and the country this way that doesn’t include racial hatred. (Anybody still use economic anxiety?) It’s hate. Simply hate. Their hate trumps any policy or politician, really. If Trump does immigration deal they’ll turn on him too. Thing with him is they realize that deep deep down, he truly hates black and brown people as much as them. So there is really no final line. He literally could start a nuclear war and they wouldn’t give a shit even if they, their sons, brothers, wives and children died. As long as the next day he called all asians slant eyed yellow rice dicks.